Beneath the Music from a Farther Room

Her hand slides up to the back of his neck and her palm touches the strip of bare skin above his collar. She drags her thumb through the short, soft hairs at his nape. Mary likes him clever and polished, but a wild and terrible part of her guesses at what else he has to offer. 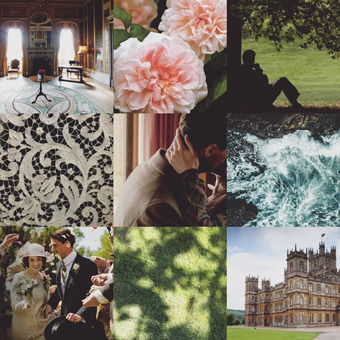 The news of Mary’s engagement causes very little stir at Downton Abbey, as the match is neither brilliant nor disgraceful, and lacks even the charm of the unexpected.

Downstairs, Mrs. Patmore is horror-struck at the thought that sufficient foie gras might not be tracked down in time for her prized aspic to grace the wedding breakfast table. Carson grumbles—grumbles respectfully—that flower garlands were not to be got by Saturday, certainly not at the scale required to reflect well on the Family.

A general feeling settles in the house, upstairs and down, that what could be managed in less than a week would hardly feel like a real Crowley Wedding at all.

“Wedding planning is no time for sentimental attachments to lace and centerpieces,” Granny Violet announces at tea the following afternoon, setting her teacup down for emphasis. “Not at least for second weddings.”

Mary does not plan to lose sleep over lace, flower garlands or foie gras.

“I’m determined on Saturday.” She had felt less strongly about the date before everyone began this silly fuss. “I don’t require anything more than a priest, dress, bouquet and groom,”  she adds, more because the phrase strikes her as clever than because she particularly means it.

But she imagines repeating the same weeks of planning and waiting—the rounds of fittings and all her perfectly judged invitations—and for a moment wishes she could droop back against the sofa at the undertow of weariness that drags at her from the thought alone.

Well. Loss has a way of drawing a thick black line through many things that she once believed mattered so terribly much.

“But you will need lace for your dress, dear,” her mother says from the corner of the other sofa.

Ruminations on the sad decline of English lace meander by, half-unheeded, as she studies Henry across the room. He gives Tom a tiny half-mocking salute with his teacup and she watches how his elegant, long-fingered hands curl around the cup and saucer. The slants of afternoon light turn everything hazy and golden like the whole world was enclosed in a gilt soap bubble.

As though her gaze were a nudge, Henry looks over and then touches Tom’s elbow in apology as he drops their conversation.

She likes this feeling of drawing him across rooms.

Henry joins her on the sofa and leans in to whisper, “I was pleased to make your list of wedding requirements, earlier.”

“If I had to cut anything more, I’d even give up the bouquet before I’d give up you. But I’m afraid you’re tied with the dress as far as needful things go.”

He is so close that Mary feels his laugh against her skin, which makes her shiver.

“I can live with that.” His voice drops even lower. “Since I’m the lucky man who’ll get to undress you.”

His glance carries the rest.

She gives him a look in return that she knows lands somewhere between reproof at his daring—here, in the library—and suppressed laughter.

All around them, failing voices overlap with the delicate clinks of spoons and porcelain.

Pulling together a small wedding is not, in the end, very much trouble—more effort than dinner for twelve and considerably less aggravation than the summer garden party.

Yet even a simple ceremony turns up decisions and problems day after day as the week drifts forward. Everyone in the family has opinions and judgments on matters that hardly concern them. Mary’s patience twists and frays until the mass of unsaid remarks begin to fill her lungs with a suffocating weight, rising up in her throat to be only just held back.

But Mary will be better than this—she will—even if the first handful of moments after saying exactly what she thinks are always so divine, like pushing up to the surface of a pool after an age underwater.

During an endless discussion after lunch with her mother, father and Tom of whether a cottage at Whitby or the Grand at Scarborough would provide more charm for the honeymoon, Mary abruptly stands and announces that she will take a walk, alone—and the momentary blot of bad manners is a lesser evil than whatever she would have said to Tom just then about honeymoons.

Outside in the sunlight, Mary closes her eyes. She pulls in a breath that she holds until she can feel her heart beat faster.

She lets the breath go as a sigh and traces a path out into the gardens.

Mary knows they mean well—for whatever that’s worth—and she loves them all of course. She just wishes she liked them more and that these conversations weren’t all so similar, so tiresome.

She passes through the rose garden with its profusions of unfurled blossoms in deep reds and corals and the many tints of pinks that her mother loves so. The sweet musk scent intensifies and then ebbs with the changeful drifts of the breeze. Ahead, the lawn is an open expanse of tranquil green.

In the back of her mind, the ghost of Edith’s ruined happiness rattles its chains like a penny dreadful or something out of Dickens.

The question flickers and fades as she wanders onto the western lawn. The afternoon is still warm while she stays in the sun but shifts cool when she crosses into the drawn-out patches of shade cast by the lovely old oaks.

She starts as Henry’s voice pulls her out of herself.

Mary hadn’t been looking for him, which is probably how she’d found him, life being what it is.

He is sitting on the grass, leaning against a tree trunk with a pocket edition dangling in his hand. The gilt print of the title is too worn to make out.

“Everything all right?” he asks, leaning forward with his elbows on his knees when she stays silent. Dappled light and shade fall on him, filtering through leaves to curve along his arms and shoulders with shifting patterns.

On a whim, she decides to sit next to him on the bare grass without even the civilized veneer of a picnic blanket.

His eyebrows shoot up and she finds that she likes surprising him.

“I won’t explain the tedious family debates, which are all the same. We’re still going to Scarborough.”

Henry gives a faint shrug and slants a look at her. “However you like. I’m not going for any views of the ocean.”

He catches her eye, studying her a moment, before he leans in to kiss her, sweet and simple.

Her hand comes to rest on his shoulder and she tilts her head, just a little. His mouth opens against hers and the hot spark inside the kiss catches. Mary almost demurs without being quite sure why beyond the old blind instinct for concealment.

But she isn't twenty with indiscretions to bury. He knows that she had a life before him. She doesn't have to maintain the illusion of being untouched and unknowing like a doll still wrapped up in its tissue paper. And so she kisses him back with the frank desire he has always inspired until the press of their mouths is messy and open, thrumming with thoughts of what she wants from him.

Her hand slides up to the back of his neck and her palm touches the strip of bare skin above his collar. She drags her thumb through the short, soft hairs at his nape.

Mary likes him clever and polished, but a wild and terrible part of her guesses at what else he has to offer.

Henry starts to gentle the kiss and then simply breaks away with a lack of finesse that makes a small glow of triumph flicker to life in her chest. He rests his forehead against her shoulder with a groan.

“How many days until I'm your husband?”

Henry laughs and kisses the high point of her shoulder with a flash of his unpredictable tenderness before straightening.

It's a line, lit with the imperfect sincerity of a habitual flirt and not anything Mary can take to heart. But everyone wants Mary to change, always, so the sentiment is pleasant to hear, even if half meant.

“Dinner can’t be long now,” she says, making sure her voice is breezily unaffected. “We should go in.”

He closes his eyes, takes a steadying breath and murmurs to himself, “four more days, man. Four more days.”

Mary hides her smile. But when he ducks in again to kiss her, playful and brash, she lets a little of her smile slip into the kiss.

Henry stands, offers her a hand and pulls her up. Their hands stay clasped as they cross the lawn.

“I mean it, you know,” he says, ducking his head and looking away.

He pauses, tugging her to a halt and staring down at her. He brushes a fluttering strain of her hair back and the tips of his fingers graze her cheek.

“You are magnificent. I’ve never met any woman like you before. You dazzle me.” He gives a sharp, uneven smile and looks away again. “There. I sound like a Florence Barclay novel. I don’t know how to say what I mean and have it not seem...”

He shrugs one shoulder.

We all tread along our worn-in tracks, Mary thinks. Even when we want to do better.

His glibness. Her cruelty.

How distorted we make ourselves.

She could name an evil genius for each person she knows.

Mary reaches to touch his cheek, remembering him red-eyed and heartbroken at the track after the fatal crash, hunched down near the ground as though he could no longer hold himself up.

Somewhere under all his pleasant, obfuscating and occasionally hollow charm is a heart worth possessing.

Mary goes on tiptoe to kiss the corner of his mouth. She draws back and thinks, I love you, before saying, “You sell yourself short. You were at least a Wharton. Maybe even a Fitzgerald.”

Henry laughs and squeezes her hand. “You wound me. Or flatter me. I’ll try to make out which.”

She’ll take Henry as he is, which she doesn’t say aloud since the words would come out as cutting even if she means only, for once, to be honest.

For better or worse amounts to much the same thing in the end, though with a nicer sound, and she’ll be making that vow to him soon enough. So instead, she pulls him into another kiss that remains light and slow since they are within sight of the house, but still sends a lovely thrill through her.

Behind them, the lingering sunlight gleams off the windows of Downton Abbey with a dreamy, mirage-like shimmer.

Find me on tumblr at @burberrycanary.