“Did you hear Trevor’s got a new boyfriend?” Ellie asks as she passes the bottle to Julie, shooting a vaguely judgemental look across the roof at where Trevor and the rest of the more obnoxious cousins are gathered into a loud, obnoxious circle.

“It’ll last ten minutes before he realizes Trevor’s an asshole.” Julie says as she takes a long drink, “Is he cute?”

AKA the Cryptid Uncle AU!

Happy New Years Eve! This is twitters fault, and also just an excuse for me to reach 200k before the New Year.

Check out the twitter thread here to see some of my fave twitter people coming up with amazing shit.

(See the end of the work for more notes and other works inspired by this one.) 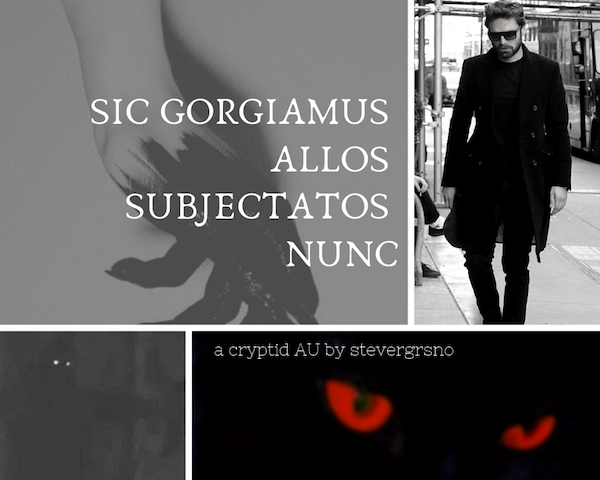 New Years Day Dinner is practically a high holy day in Julie’s family. Every aunt, uncle, and cousin no matter how distant descends onto her parent’s home and fills the space up until it feels impossible to breathe at all.

Julie guesses she’s lucky at least. At 24 she’s at the right age that she doesn’t have to help with cooking, but isn’t one of ‘the kids.’ Instead she absconds to the roof with the rest of ‘the cousins’ around her age where somebody will inevitably break out a bottle of something and there they’ll remain until one of the aunties calls them in for dinner.

“Did you hear Trevor’s got a new boyfriend?” Ellie asks as she passes the bottle to Julie, shooting a vaguely judgemental look across the roof at where Trevor and the rest of the more obnoxious cousins are gathered into a loud, obnoxious circle.

“It’ll last ten minutes before he realizes Trevor’s an asshole.” Julie says as she takes a long drink, “Is he cute?”

“You don’t just bring new people to New Years. You’ve gotta be married into this shit beforehand.” Julie says with a shake of her head and her own judgemental look towards Trevor.

The thing about Julie’s family is that they have some fucking Addams Family level of weird members. Auntie Nat’s eyes sometimes glow red like fresh splattered blood, Uncle James smiles with too many teeth, and Uncle Nick once lifted his eyepatch for Julie when she was a kid and she’s pretty sure she glimpsed things that Should Not Be Seen. It means that for all those who want to think they’re “normal” bringing company is rare.

Usually they leave it until after the wedding.

Some people wait until the first shadow creeps along the wall after they have their first born and it becomes a thing that can no longer be put off.

Trevor dragging Steve with his startling wide shoulders, earnest eyes, and smile that makes Julie want to pledge her everlasting loyalty while they’re just dating is against the Status Quo. Hell, Julie’s pretty sure it has to be against some sort of family by-law.

“Does anybody have the handbook?” Julie asks as she loads her plate up with seconds and watches Trevor watch Trevor’s Boyfriend Steve and Uncle James watch each other from across the table.

Steve looks about .5 seconds from crawling across the table and sitting in Uncle James’ lap and Uncle James’ suit is somehow tighter than it was twenty minutes ago.

“I don’t think anyone’s seen it since Midsummer,” Ellie says and Julie’s gaze swivels to rest on her.

“Mmmh,” Julie says, stabbing at a piece of something delicious on her plate. She doesn’t ask what it is. She’s learned to never ask what it is.“I wanted to check the by-laws.”

Cousin Trevor’s Boyfriend Steve is somehow now in the seat next to Uncle James.

Jeremy sighs and Julie thinks he’s attempting to remind them all that Cousin Jeremy’s Husband Eric is new.

“Yours doesn’t?” Ellie asks and smiles to show all her teeth.

Jeremy pats his shoulder sympathetically before threatening Cousin Rachel with his fork until she passes the potatoes.

A few of the aunts join the cousins on the roof after dinner. Auntie Nat is among them.

She pours Julie a glass of vodka and then proceeds to stare at her with dead eyes until Julie drinks it.

Julie’s still coughing up half a lung when Auntie Nat pours her another glass and asks, “Does Trevor seem particularly attached  to this Steve?”

“Fair,” Auntie Nat says, drinks both her own glass of vodka and Julie’s, and then pats at Julie’s head like she’s a wayward cat, “Be a good niece and go get us more vodka from the kitchen.”

When Julie stumbles into the kitchen she finds Uncle James and Cousin Trevor’s Boyfriend Steve.

Cousin Trevor’s Boyfriend Steve who will probably not be Cousin Trevor’s boyfriend after this, considering the way Steve’s hands are down the back of Uncle James’ very nice Gucci slacks. Julie feels a little like she’s watching a train crash, her head tilting to the side as Uncle James apparently does something interesting and moan worthy with his mouth to Steve’s throat.

She feels the squeak leave her mouth and Uncle James and Cousin Trevor’s Not Boyfriend For Much Longer Steve both swivel to stare at her. Oh god, they both have sharp teeth.

“Uh. Yeah. Grad school. I think it’s making me an alcoholic and I haven’t slept in approximately two years. It might actually be killing me. Going great though,” Julie says honestly, stepping closer to take a bottle of wine when Steve holds it out to her.

Julie doesn’t remember him moving to get it.

“Keep up the good work, kid. You’re gonna change the world one day.” Uncle James says and this time when he smiles it’s closed mouthed and warm and Julie puffs up with no small amount of pride. Uncle James might be weird and terrifying, but he’s also pretty much every cousin’s favorite uncle by far. The sincere encouragement he doles out to each and every one of them is certainly part of it.

He once showed up to Julie’s ballet recital with a whole bottle of wine, a check for the arts department at her school, and a sign that said ‘I <3 JULIE!’

“Thanks,” Julie says, smiling back at Uncle James, “Uh, Steve, you want me to tell Trevor he should find a new boyfriend?”

“I should tell him myself, Buck, it’s only right,” Steve says, shoving at Uncle James’ side.

Julie looks between the two of them as they look at each other, shrugs, and starts to back out, “You two keep having a telepathic conversation or whatever, I’m telling Trevor.”

Trevor’s a douche, it’ll be fun.

The next time Julie sees Uncle James it’s for Midsummer. He’s leaning halfway across Steve’s lap and whispering something to Auntie Nat who is casually sharpening a knife.

Julie’s a little jealous. She thinks the handle is gold. It’s engraved .

“I heard he brought a goat to sacrifice,” Trevor whispers in Julie’s ear at lunch.

“Nobody’s sacrificing a goat Trevor, Jesus,” Ellie says from her spot on the other side of Julie, “Besides,  Uncle James’ Boyfriend Steve wouldn’t let him,” She adds, stars in her eyes.

Sic Gorgiamus Allos Subjectatos Nunc - We Gladly Feast on Those Who Would Subdue Us.

Come find me on twitter at "attackofthezee" and dreamwidth at "stevergrsno" Sometimes I'm funny over there.