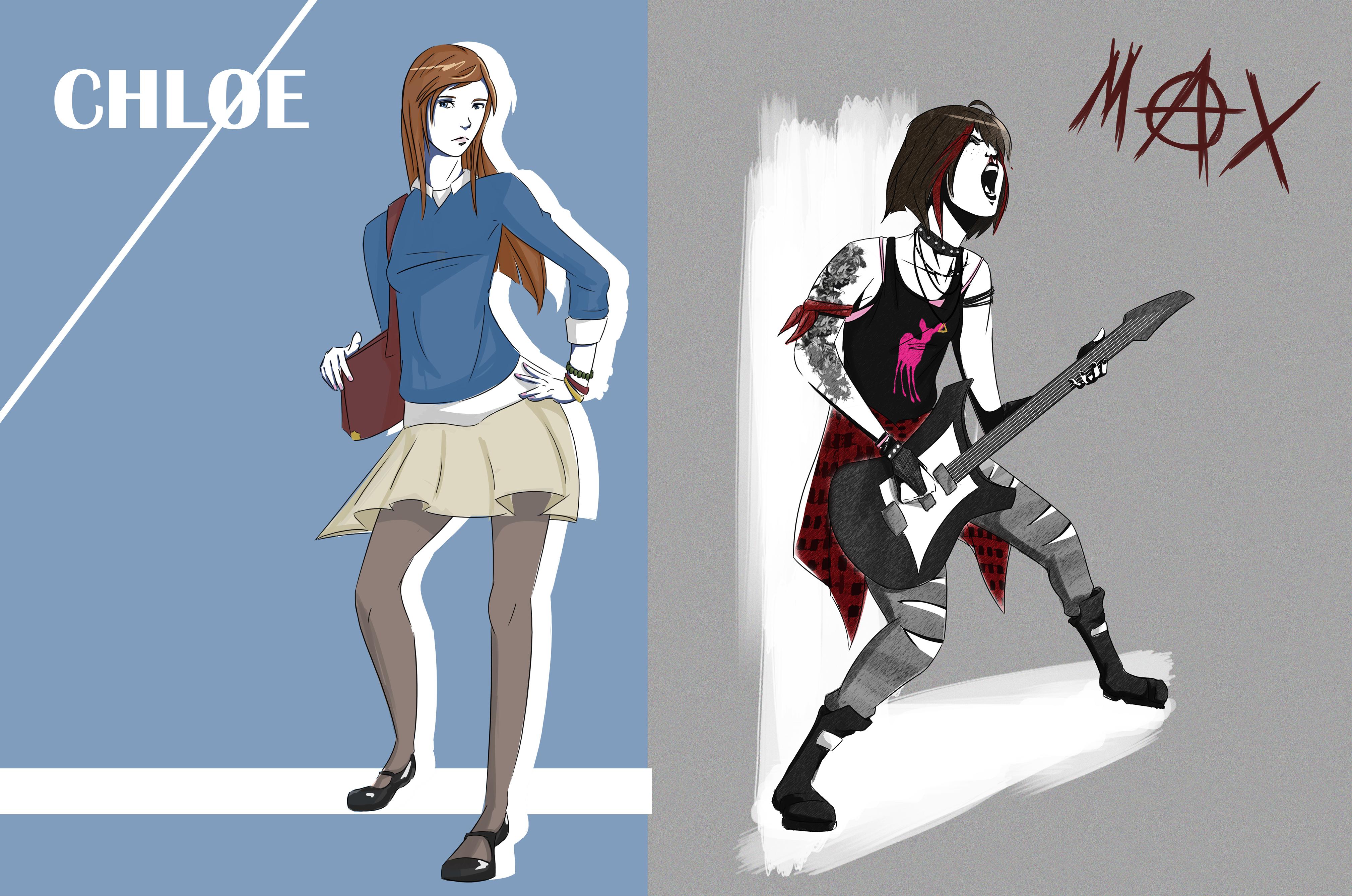 Chloe walked into Max's new dorm room. "Y'know Max, this bank internship isn't nearly as bad as I worried it would be. The first week has been fine. Though I feel like I'm wearing a boring-person costume all the time."

Max laughed from behind her old acoustic guitar. "But I know your secret identity."

"It's over at the music building. Since I'm taking lessons through the college they gave me an instrument locker there - and I can use the practice rooms too." Max blushed a little. "It's... it's kind of fun to really crank up the volume. And Chloe..." Max's voice became hushed and low. "Even though nothing can top your dad's camera last year, that was a truly thoughtful 19th birthday present. Thank you."

Chloe looked into Max's eyes with a hearfelt warmth for just a couple seconds before quickly deflecting the serious moment. "Ha! We'll make a shredder out of you yet!"

Max grinned. "It's true! I'm working on my scales - Phyrigian and Mixolydian and..."

"What's that? Fridge? Mix? On it, Max!" Chloe winked, grabbing a couple of plastic cups and a bottle, opening the small dorm refrigerator.

"Dude, I am so excited! Your first official legal drink. You'll be 21 in-" Chloe looked at her phone- "3 hours and 13 minutes! And I can't believe you actually wanted to go out to that original music bar." Chloe fiddled with her phone for a moment, reading."The acoustic duo is at 10, Cyclone is playing at 11, and then at midnight it says TBA. But dude, whoever it is is gonna be awesome - this place always has great bands. I'm hella excited Max!"

Max smirked. "Oh believe me, I'm excited too. You're not the only one who likes live music, Chlo' - we definitely have to see that last band. It's going to be the best birthday ever!"

The ending chords of Cyclone's last song rang out at 11:45 as Chloe returned from the restroom to her barstool and sat down. She frowned. The seat next to her, where Max had been just a minute ago, was empty. It's almost midnight. Where'd my Max run off to? She's not avoiding her 21st birthday shot, is she?

The ratty curtain descended to hide the stage as the band quickly began tearing down their equipment in preparation for the next act to come onstage, leaving the drums, microphones, and amplifiers in place.

5 minutes passed. Chloe looked at her phone - no messages from Max. Under the stage curtain, the shoes and shadows of the next band were visible as they started to set up.

5 more minutes. Chloe looked around the bar - no sign of Max. She sent a text. "Yo Max where did you go?"

5 more minutes. Chloe looked past the rows of bottles into the mirror. Her hair had long since grown out, and she'd cut off the last of the blue. She was wearing an outfit her teenage self wouldn't have been caught dead in. My boring-person costume. When did I forget it was a costume? Fuck. I don't even fit in here anymore. She swirled her drink, then downed it. A second drink stood untouched in front of Max's empty stool. What the hell, Max? Are you OK? Did you chicken out, or... or finally decide to ditch me? Chloe was furious at herself for falling into her old negative patterns of thought, but still, she couldn't help it. Something dark and despairing welled up in the pit of her stomach.

The MC stepped in front of the stage curtain with a wireless microphone. "Let's give one more hand for Cyclone!" Everyone clapped. "And now, Maximum Distortion!"

Chloe was fighting to hold back tears, staring at the empty seat next to her. This is the band she was so insistent on seeing, but she's fucking ghosting me. Fuck this. Abandoning the bar, Chloe stood up, angrily throwing a 20-dollar bill on the counter. Onstage, the MC walked off to the side, the curtain raised, and a crashing, aggressive instrumental accompaniment hit Chloe in the ears and chest as she made her way to the exit.

Hand on the door, Chloe stopped. Above the bass, guitars, and drums, she heard an amplified voice coming through the PA system. Strangely familiar, yet different. A female voice, rough and aggressive enough to fit the music, but with an undeniable underlying sweetness. The lyrics contrasted sharply with the feel of the instrumentals - something warm and heartfelt about devotion and weathering a storm together.

Chloe shut her burning eyes, leaning against the door. God damn it. Why couldn't you weather this storm with me, Max? After a moment, the singer finished the second verse and Chloe's breath was taken away by an incredible shredding guitar solo. Despite her mood, Chloe was truly impressed. Damn, these guys are really good. And if I stay, maybe I'll, like... Meet someone, or whatever. She scoffed to herself. Heh. Like a hot singer or guitarist chick.

She took a deep breath and turned back toward the bar, glancing at the stage before settling in her stool, grabbing Max's would-be 21st birthday drink. Then Chloe's head whipped around, back to the band.

Her eyes bugged out and her jaw dropped. She stared as the stunning punk-dressed woman in the spotlight finished her dizzying guitar solo and strutted back to the microphone to resume singing. Chloe's heart leapt in her throat.

hoper35, ItsaVikingThing, maniacal1, Coh, and Dom_Avner as well as 7 guests left kudos on this work!