Our DNA is the basis of our very existence and our genes are carried down to our offspring. But once in a million times, the basic laws of biology is broken. Once in a while, a miracle happens. In this case, the miracle is named Javier. 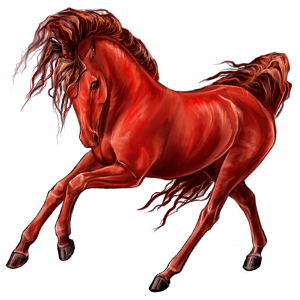 It took a total of four hours, but after much encouraging and pushing, one little curly foal was finally taking its first breaths. The mother huffed before raising her head to have a look at her newborn. She snorted softly and started licking it clean - I did my best to help out by carefully wiping the little one with a warm towel. I wasn't exactly confident that she’d appreciate my half-assed help, but Emma smiled at me from where she sat adjacent to me. I supposed I was doing somewhat of a good job.

It was quickly confirmed that the little one was a filly, and she was very soon up and about on unsteady legs. She looked a bit scrawny, but I guessed all foals do when they first arrive into the world. I felt a big grin spread in my face as the little one sniffed a few different things in her immediate vicinity - her mother, among other things. Emma didn't look quite as pleased though. She wore a frown on her face. Was something wrong?

"Gaia should be up on her own feet by now" she mumbled, her hand gently stroking the dark, curly fur of her beloved mare. "Something isn't right. She need to nurse the foal". I didn't really  understand her concern; the mare didn't seem to be in a hurry. And surely, the foal would be fine for a few more minutes. I was quite certain Gaia knew how much time she needed until she could stand after such an exhausting feat. But then again, Emma had been through these things before, so she should know, shouldn't she? Maybe the mare was just tired from the start and needed some extra time.

Soon enough, the situation turned on our heads. Gaia laid her head down again and her breathing became heavier. It seemed as the mare was in pain. Now I could see why Emma was worried. She was quick to fish her phone out of her pocket and call whoever was on the top of her speed-dial list. My hands were sliding back and forth on Gaia's bum, trying to calm her from where I sat. Absently I was checking her over to see what was wrong with her. She was clearly in pain, and from what I knew, horses weren't supposed to be in this much pain after giving birth. I heard Emma speak to whoever was on the other line, but I didn't listen. Something had caught my attention.

"Emma, come quick!" I blurted suddenly, now realizing what it was I saw. "I think Gaia is having twins". She was at my side in a flash, hands roaming over her mare's body, examining her thoroughly, and her expression quickly changed. I had been right then. The mare was about to give birth to a second foal.

"Come on girl, push darling" Emma encouraged while stroking Gaia's flank. Despite the recent discovery and the cheerful mood, something was collecting in the pit of my stomach. For a reason I couldn't explain I was getting unnerved. Something was about to happen. I wasn't sure if it was bad or good, but I knew it had to do with the incoming foal. My hands absently fumbled with the hem of my shirt. I didn't know whether to sit or stand. Restlessness were nibbling on my toes.

"Ely, are you seeing this?". Here comes the bad news. My stomach clenched uncomfortably and I looked up at Emma. The tone of her voice was alarming, but her eyes were focused in front of her. She was suddenly beaming, but her expression also carried wonderment and awe. I looked down to see what she was looking at and my eyes widened.

"Wasn't Ouranos flaxen, just like Gaia..?" I asked, breathless. Emma nodded, but didn't give a word for a response. I licked my lips. If I knew one thing about horses, it was that genetics followed a pattern - a law of simple biology. Three generations of flaxen horses, some darker and some lighter, but always the tan, birch or white mane and tail. The only possible explanation was some sort of an anomaly, but to this extent? How was this possible?

We were both struck by awe, but helped the foal into the world and wiped it clean with the warm towels. A healthy baby boy was born, and soon enough, both Gaia and her two foals were standing up. Emma was finally calming down, now understanding what had made her mare so distraught. I stood by and watched while she helped the filly and colt have their first nurse. She joined me when assured they were doing okay and crossed her arms over her chest.

"Well, I did promise you Gaia's foal".

I cocked an eyebrow and pointed at both of them respectively. "But which one?".

Emma sighed softly and turned to look at the little family. I figured she was thinking things over and instinctively bit my lip while sending a silent wish to whoever would listen. "You know, you've been a great help lately. It’s not more than right that you get the both of them" she said with a smile, and I felt my whole face light up with a grin. "But you have to promise me that I can come over sometimes. I mean, this is--". She didn't say more, but she didn't need to. I knew what she was thinking. The little colt was extraordinary, to say the least. I wouldn't be able to keep Emma away if I so built walls around him. And neither did I want to keep her.

"So, what are you thinking?" Emma asked suddenly, taking me off-guard. I looked at her dumbfounded. "Their names, stupid! They need something special, especially the colt" she explained, gesturing widely with her hands. Right, names. I had been too preoccupied with watching them I hadn't had a thought about that. My brain almost overworked itself as I pondered.

"I know the perfect ones" I said as I walked over to the foals and kneeled down in front of them. I touched each of their muzzles and stroked the soft fur along their crest. "Queiry, the beautiful, long-awaited filly". I paused for a moment to touch her shoulders and withers. "And Javier. An extraordinary colt, unlike any other. To be known when he grows up, as the red stallion".