The Stars Are Right (a.k.a. the stars are so very, very wrong)

A romantic tale of love in the moonlight... No, that's wrong.
Milky Way visits the coast at night, and isn't she surprised at what she finds there! More wrong. She doesn't find; she summons. Accidentally. Kinda.
Cthulhu wakes from his endless dreaming sleep to find a pink unicorn with stars on her ass waiting for him. Closer, but still wrong.

Look, if you really *need* a summary after seeing the fandoms & tags, THIS IS NOT THE FIC FOR YOU.

The picture at the end is by Mr. Wreck, who spends too much time enabling me. 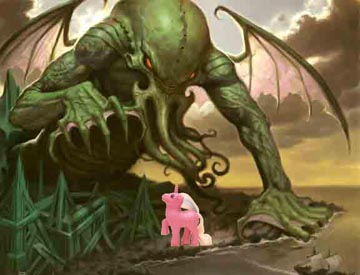 Milky Way was so *happy* with her new boyfriend. He was green! Green was very rare among ponies, and she didn't know *any* other green Pegasus Ponies. He also had a unique pose, one she'd never seen any other pony in, and his hooves were funny-shaped. He had a beard made out of pretty green snakey-viney bits. Tentacles, she'd heard them called, although he had a lot more than ten of them. (She supposed that was a Sea Pegasus thing; everyone knew they couldn't really count because the waves kept moving things around when they tried to learn numbers.) And the ends of his legs split into separate parts, like twigs, with a little tiny hoof on the end of each branch. It was like he had tentacles even on his feet. Tentahoofs. She giggled to herself, just thinking about it.

She'd been frolicking by the seashore, watching the reflection of the moonlight flickering against the silvery stars across her body and rump, when they met. She'd tossed her mane to the left, except for the lock of blue hair, which fell over a band of stars at her waist and curled to obscure some of them from the light. When she saw the pretty pattern reflected in the water, she whinnied in such delight that sparks shot out of her horn… and then the water started bubbling.

The ocean burbled and frothed and roiled, and his dark, massive form rose out of the depths. His wings unfurled, copper-bright in the moonlight, and his red eyes glowed as his booming voice echoed across the sky.

THE STARS HAVE ALIGNÉD. WHO WAKETH ME FROM MY SLUMBER AND CALLETH ME FORTH FROM R'LYEH?

Milky Way looked up in awe. He was so *big!* So very tall, and a pretty greeny-black color, like tiny frogs, only he must've been a million times larger than a frog. She wasn't even sure she could see his eyes, except that they were glowing, like rubies in the sun. And he was slick and wet all over, like Sea Ponies, but he had wings, like a Pegasus Pony, and she knew he must be a very special kind of Pony indeed.

"I did, I suppose. I'm sorry I woke you up," she said, blinking her sapphire blue eyes contritely.

He turned his head, tentacles twisting as if he were sniffing the air, before he spotted her. He leaned over her, raising one of his forehooves in what must've been a Sea Pony greeting, and as the water dripped from the tips of his hooflets, Milky Way shivered in joy at the coolness of the drops falling on her back. She twitched her tail and shook her mane to better enjoy the rivulets running over her.

As her hair fell over some of the stars on her back, he roared so loud that the ground shook, and Milky Way danced around trying to keep her footing, but fell to her foreknees. Looking back over her shoulder, she could see that he had a horn! So he was a Unicorn Pegasus Sea Pony! Her brow furrowed as she realized his horn was in a very odd place, which was all she had time to think before he knelt over her and started poking her with it. It was so big it covered her entire belly and nudged a the underside of her neck.

She tried to get to her feet, but every time she almost managed to, he pushed her down again.

"Hey!" she said indignantly. "Don't you Sea Ponies know how to cross horns? Mine's on my head! You won't find it down there!" She shook her head, shooting angry sparks from her horn.

He growled, which made her whole body shudder, and she decided to enjoy this new Sea Pony game, and slid along the length of his horn, back and forth, enjoying the sleek, slippery feel of it against her skin, nuzzling the point (which was very round for a horn-tip, but she had no idea what all that water did to Unicorns) with her cheek. She couldn't keep her footing, but that was okay, because every time she started to slip to one side or the other, his tentacles wrapped around her legs and held her in place, cool and slick between his horn and his belly.

She squeezed his horn with her legs, enjoying the rippling pulses, and watched in glee when the end started to splash—it made sense that Sea Ponies would shoot splashes, not stars, from their horns. She caught a few drops from one of the splashes on her tongue before he was rubbing so much faster and harder that she couldn't do anything but squeeze back.

He pulled back so far the tip of his horn was buried in her tail, and then he drenched her whole body with thick, slimy fluid, white as moonlight and shimmery like the ocean. It ran down her face and she licked at it, tasting its salty magic; it slid into the most secret parts of her, and she quivered in bliss at the strange sensation.

He pulled his softening horn away and stood over her, and his monstrous voice once again surrounded her.

THOU SHALT BEAR THE SPAWN OF CTHULHU THE GREAT OLD ONE.

He turned away and walked back into the ocean, and she watched wistfully as the waves closed over his head and the tips of his wings.

Milky Way was sure she was the luckiest Unicorn Pony in the whole world.

A year later, little Sunshine Swampy proved to all Milky Way's friends that she hadn't been delusional fibbing about her special night on the beach. 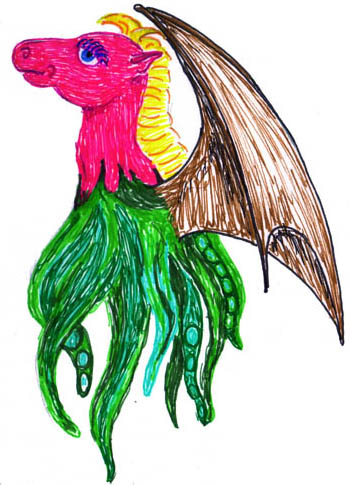