When thots numbers have grown to large, a group was formed to put a stop to them. This is how it all started.

Ahh Thots… Fuck them! Thots ruin everything, and they dont care that they do! So you know what? It's no surprise that a group would eventually be formed to put an end to thots. But i'm getting ahead of myself. Why dont I start from the beginning? 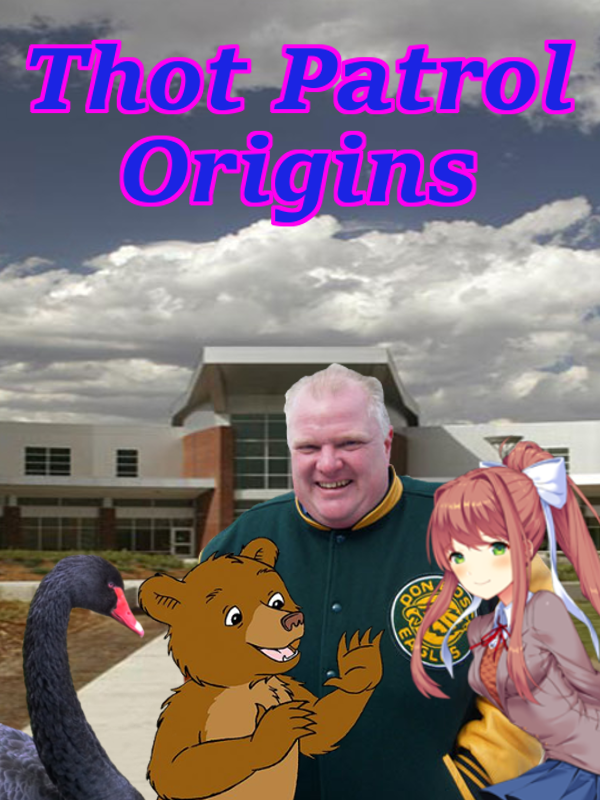 It was a seemingly normal day at Ford High School. The school day was over, and the only people staying behind were janitors, and various club members. One of these clubs was the Literacy club, and this club was run by a very smart and pretty girl named Monika.

Running the Literacy Club was no different than it was when she was trapped in that video game. Heck, Yuri, Natsuki, Sayori, and Main Character (they call him MC for short) were still the only ones in the club.

Still, Monika was just happy that Rob Ford managed to free her and her friends from the game. And having to attend Robs high school was a very small price to pay for freedom. Rob Ford surprisingly ran the high school pretty well.

Monika was more than excited to start sharing poems with her friends. However, she noticed that her friends seemed to be more preoccupied with something outside, as they were just staring out the window.

“ You guys must be looking at something amazing! This is the first time I have seen you all not talking to each other. ” Monika said, as she walked up to them.

Yuri turned to face Monika, with a happy look on her face.

Monika looked outside, and did indeed see the Black Swans. She couldn't help but smile at the cuteness. None of them ever got to see stuff like this in their game, so Monika was alright with everyone focusing on the Black Swans. However, what Monika didn't know was that these were not ordinary Black Swans.

Outside, the Blacks Swans were hanging out, and eating some grass. The Male Black Swan noticed Monika and her friends staring at them, and turned to his mate.

“ Oy Olivia, those humans are looking at us. You think their gonna attack our cygnets? ”

The Female looked at them, and then looked back at him.

“ I dont think they will William, but I think we should keep an eye on them just incase. ”

They went back to eating their grass, while making sure their 5 cygnets were close by. Natsuki was the only one that noticed that the two Black Swans were talking, but she didn't say anything. She didn't want her friends to think she was weird if she was wrong, so she just continued to watch the birds.

Unfortunately, trouble was about to hit the Black Swans.

Three Thots, and two dude bros started to walk towards the Black Swans. William and Olivia knew that these types of people were trouble. So Olivia covered the Cygnets under her right wing, while William stood up, and walked up to the group.

“ AW HELL NAWW!!!! Dis Black Swan given us dat angry look! ” One of the thots with blond hair yelled.

“ Listen BRO! U better stop looking at us like that U fat ass bird! ” A dude bro yelled, while holding up his black shirt to show off his abbs.

William didnt respond, and just stared at them in anger.

The black shirt dude bro fell to the ground in pain, pissing off the Thots and the other dude bro that was wearing a tank top.

They were about to gang up on William, but stopped when they heard someone yell at them from behind.

“ Hey! Why are you guys being so mean to that Black Swan? ”

They all looked back, and saw a freshman little bear wearing a generic school outfit. They were not impressed. The blond thot walked up to him, and grabbed him by his shirt collar.

Little Bear was to scared to speak. Monika on the other hand was already mad, but this pushed her over the edge. Without saying a word, Monika ran out of the classroom.

The thot was about to bitch smack Little Bear across the face, but fortunately, Monika was there. She grabbed the thots hand, and twisted it until the thot let go of Little Bear. Of course the other thots and the dude bro were not happy.

“ U bitch! U dunt fuck with my girl! ” The thot with black haired yelled.

Just as they started to run at Monika, a very loud man stopped them in their tracks.

“ HEY! What's going on out- GOD DAMMIT! I WARNED YOU THOTS TO NEVER COME BACK TO MY SCHOOL! ”

Everyone looked up to the second story of the school, and saw Principle Rob Ford looking out the window, with a little bit of white powder on his nose. The thots looked kinda scared, but the tank top dude bro got angry.

“ Hey fat man! U gonna come down here so I can beat you and these two up to? ”

Rob For looked at the two he was talking about, and got infuriated.

“ THOSE ARE MY STUDENTS! I'M GOING TO KICK YOUR ASS! ”

Rob Ford jumped out of the window, landed on the ground, and ran towards the tank top dude bro. Rob then uppercutted the dude bro so hard, that he knocked him up into the air. The dude bro was instantly knocked out by this.

As soon as the dude bros body hit the ground, everyone looked it his lifeless body in shock. The Thots were considering just running away, but instead decided that they could maybe take Rob on.

The two thots were about to start scratching at Rob, but William flew at the brown haired thot, and grabbed her hair with his mouth. The thot flailed around, and eventually fell to the ground, while William continued to pull.

Rob took advantage of the distraction, and grabbed the other thot by the neck. He then choke slammed her, knocking her out.

Meanwhile, Monika was brutally beating the blond thot to a near bloody pulp while she was on the ground. Little Bear wasn't really sure if the thot was still conscious or not, but soon stopped focusing on her when he noticed the dude bro that William bit in the nuts was standing back up.

The Black shirt dude bro pulled out a knife, and was looking to stab William, who was to distracted attacking the brown haired thot. Little Bear quickly ran to the dude bro, and decided to have a talk with him.

“ What do you have against that Black Swan anyway? It looked like he was just defending his family. Dont you have better things to do with your life? ”

The dude bro was about to start yelling at Little Bear, but stopped to actually think about what he was doing.

The dude bro then sat down on the ground to think about his life choices.

“ Your not getting any help you worthless thot! ” Rob yelled.

Rob stomped on the thots face, knocking her out. Little Bear on the other hand looked back at Monika, who was clearly having a little too much fun beating the thot. Rob saw this, and decided to stop it.

“ Thats enough Monika! I love beating thots as much as the next guy, but the school will be sued if you kill her. ”

Monika delivered one last punch, and stood back up. She looked around at the other knocked out thots, and the dude bro knocked out in the distance. But her attention was drawn to the dude bro that was sitting down.

“ What happened to that one? ”

The dude bro looked up at her.

“ That little bear bros right, I do have better things I could be doing with my life… ”

Monika looked over at the freshman.

“ My names Little Bear. Thanks for helping me! ”

“ And thank you Principal Ford! ”

Rob felt very proud of himself. However, he also knew that there were more thots that had to be dealt with around the world.

“ Anytime! But this is just the beginning. There are more thots that must be dealt with if we are to stop their wrath. ”

“ What do you suggest that we do? ” Monika asked.

“ Well im thinking of starting a school club that's dedicated to stopping thots. Would you two be interesting in joining? And dont worry Monika, you can still be part of the literacy club. ”

Monika and Little Bear looked at each other, and nodded.

The three of them looked around to see where that very Australian voice came from. But after a few moments, William walked in front of them.

“ It was me, I want to help you take these thot cunts down! ”

“ Damn, I forgot to make that announcement a few weeks ago. You see, the Black Swans around school all got into my special crack I once hide out here. I'm not sure how, but it made them all sentient. ”

Monika and Little Bear thought about it for a moment, and realized that it made sense. They looked back at the Swan, and smiled.

“Ok Black Swan, you can join to!” Little Bear said.

“ Alright! Oh and the names William. ”

Now that they had a group, they just had to come up with a name. Fortunately, Monika knew that this story exists because the author (JustSagan, the handsome guy that MILFs hit on) created a meme about the four of them being in a group called “Thot Patrol”.

“ Alright it's settled. From this point forward, we will be called… Thot Patrol! ” Rob Ford exclaimed.

The four of them cheered the creation of their new club, and then exchanged phone numbers.

“ Now that everything is in order, I gotta clear these bodies out before the cops see em. ”

And with that, Rob Ford started to get rid of the bodies. Except for the dude bro that was sitting down, Rob just kinda left him there.

“ Well i'm gonna go back to my family, call me when you need help with some thot cunts. ” William said, before walking back to his family.

“ Well Little Bear, i'm heading back to the Literacy club, see you around! ”

Before Monika could walk away, Little Bear stopped her.

“ Wait. Do you think I could join the literacy club? It sounds like fun. ”

Monika was more than happy to have a new member.

“ Sure! Follow me, the others will be happy to see a new face. ”

Monika and Little Bear walked back into the classroom.

“ Hey everyone, I want you to meet our newest member! ”

No one responded, and just stared at Monika in shock.

Monika remembered that they were probably watching everything go down.

“ Dont be shocked everyone, Monika was just protecting me. ” Little Bear defended.

They still looked a little shocked, but were still happy that she came to Little Bears aid.

“ How about we just start sharing poems? ” Sayori suggested.

Everyone agreed, and they did just that.