The Bond That Ties Us

Two weeks after TLJ, Rey finds herself on an old Rebel base, trying to protect herself with the Force--but Kylo Ren finds a way to break through.

I do not own Star Wars, nor am I making any money off this fanfiction.

I hope this piece is enjoyed. It's going to be multi-chapter! I haven't written in the Star Wars fandom before, but I had to scratch the itch after that movie! Hopefully it'll help some of you guys. :)

Disclaimer: I do not own Star Wars, nor am I making any money off this fanfiction!

I hope this piece is enjoyed. It's going to be multi-chapter! I haven't written in the Star Wars fandom before, but I had to scratch the itch after that movie! Hopefully it'll help some of you guys. 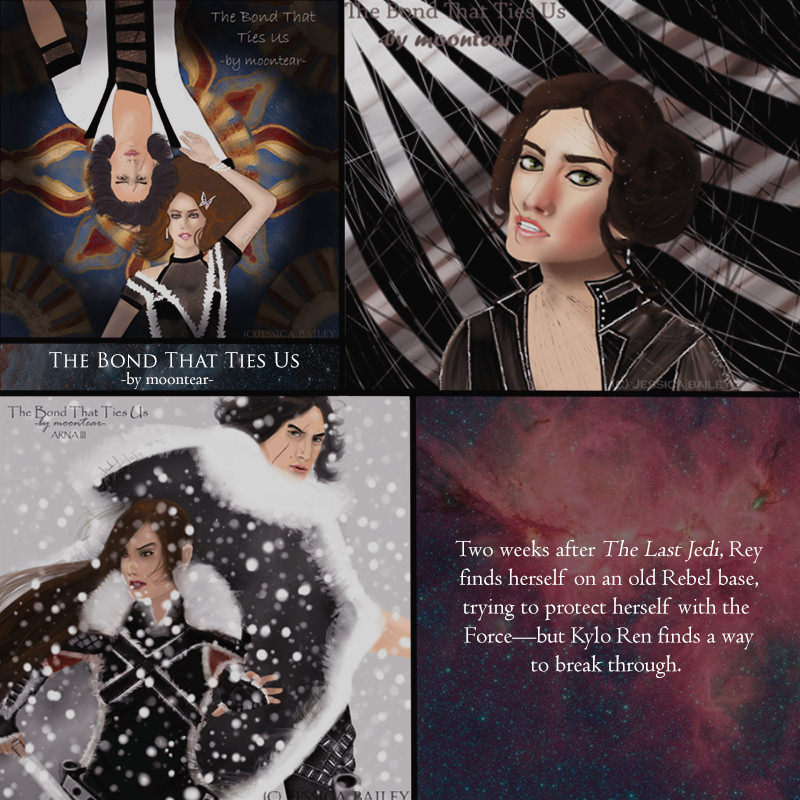 Rey had thought that with the death of Snoke, her connection to Ben—no, his name is Kylo—would be broken. But after their escape, at that moment when the Falcon was rising into the air, she'd felt it.

The string between them, snapping into place.

She was strong enough now to build walls within herself, to protect herself from his mind. He wanted to kill her. The first thing he'd done when he'd regained consciousness was fire an attack on the Resistance, never mind that she was with them. That had really told her all she needed to know, and it had broken her heart.

She seemed to be doing a very good job of hiding it, though, because no one had really noticed. Then again, maybe everyone was too focused on their own grief. This was fine. Rey preferred that not everyone knew she was a complete and total wreck.

In the adrenaline of the events with Snoke, with Ben—damn it, no, Ren—and with the ensuing battle on Crait, she hadn't had time to ponder his offer, the offer she'd spurned. She'd been fired up, angry, scared—never sad. Even with Luke's passing, she hadn't been very emotional, namely because she had felt his peace.

But in the middle of the night… when there was only the darkness and herself… her anger would falter, and tears would touch her eyes.

Snoke may have created the Force bond, may have guided the connection, but that didn't take away from the result. The fact of the matter was, Rey had felt Ben's heart—no, Kylo—no, Ren—… ah, sod it. She had felt his heart, and it wasn't something she could forget, even though she had tried. Blocking him was easy enough to do, but that just protected her from him. It didn't ease the pain that came from memories… their memories.

Creatures hooted, screeched, and howled in the jungle. Rey sat atop a boulder she had claimed for herself, legs crossed as she gazed off into the green. It was the first day in two weeks that it hadn't rained.

She lifted a strip of jerky and nibbled on it while she thought. With just a small pulse of the Force, she could get a sense of lifeforms in the area. If she wanted a more definitive signature, she'd have to concentrate. Unfortunately, keeping Ben out meant staying off the grid. She hadn't yet figured out how to take her imprint from the equation. She wasn't even sure if it was possible.

She referred to it as an "imprint," but it was a term she'd coined to try and figure out their connection. So far as she could tell, using the Force in large quantities pinged her onto the Force radar… meaning, because they were bound, Ben would be able to reach her. Before, it hadn't been as much of a concern. They couldn't control when it happened, and the link was weak. With it growing stronger and stronger, Rey wasn't taking any chances unless she had to.

Rey looked up at Finn's voice just in time for him to plop down beside her. He pulled up a knee to his chest and hooked an arm around it.

"You're like a ghost. Ever since we arrived on this backwater planet, you've been MIA."

"Yeah, that stopped a week ago."

Finn grinned. "Seriously, though, why the lone wolf act?"

Rey didn't answer immediately, staring off into the jungle. They were on the outskirts and technically safe from the dangers within. Rey was more prepared and better armed than the others, however, so she didn't mind sitting so close.

They had arrived on Solaris after Crait, and they hadn't budged since. They planned to rebuild the Resistance, but it was on hold. Solaris was another old Rebellion base, this one smaller, and it was far away from the "Supreme Leader."

Most of the weapons didn't work from both disuse and the wet environment of the planet. So much rain made for muggy weather, enough to toy with the weapon settings and create warping. A mudslide had taken out half the compound at some point in the past. That left systems down on the electronics, but their team was currently working on it. Most of the wiring was damaged beyond repair, and they couldn't exactly get replacement parts. The Falcon wasn't an option because of fuel, so they were only going to use it when it was absolutely necessary.

On the plus side, the food reserves were plentiful and still edible, if mostly tasteless.

Finn was watching her expectantly.

"Restless, I guess," she said with a small, slightly strained smile. She hadn't been getting much sleep, but she didn't want to snap at her friend. It wasn't his fault she was a little grumpy.

Finn was quiet for all of thirty seconds. "What's on your mind? You can always talk to me, you know."

Her smile more real this time, she put her arm around his shoulders. "I know. So… how are you and Rose?" She went back to her piece of jerky, popping the last bit into her mouth.

Her head snapped up and around, and her hand clapped over Finn's mouth. He must have sensed that something was seriously wrong, because he didn't put up a struggle and went still.

"Who are you trying to protect?"

Ice went down Rey's spine and caused all the hairs on her body to lift. This was impossible. Her shields were up!

But… she couldn't see him. Could he see her…?

Her fingers dug into Finn's cheek, and he winced in pain. He gave her a wildly confused look.

"I've gotten this far, Rey—don't you realize you can't hide from me forever?"

Everything inside of her wanted to buck up—wanted to yell at him, to unleash her anger, the anger she couldn't let go of. The anger that survived past the grief.

Finn began struggling, probably because he couldn't see what she could. Rey used the Force to immobilize him, and in that moment, Ben appeared.

A slow smile was creeping across his mouth, and he was making no effort to hide the fury in his dark eyes.

Rey let Finn go and rose to her feet. She could see Ben clear as day in front of her, but as usual, not his surroundings. She made a gesture for Finn to stay quiet, and she was glad he obeyed without question despite his wide, alarmed eyes.

"I have nothing to say to you," she spat. It reminded her of the first time they had used the Force Bond, both equally cautious and angry at the other. The only difference was that he wanted to kill her—wait… he had before, too. Well, still. It was much sincerer this time.

"Even if I called a truce?"

It took all the willpower she possessed to keep a blank expression, the wheels in her mind spinning rapidly. He couldn't possibly mean that. He'd sent his gods-damned army after her. Well… after the Resistance and her, but who was keeping track of that? The intent was the same. He wanted her dead.

At her side, Finn spoke in a low voice, the type of tone one might use when talking to someone a little gone in the head. "Rey… who are you talking to?"

Rey barely heard him. "You don't want a truce."

She was forcing herself not to really look at him, the way she wanted to, the way she had before. Thick, wavy black hair, pale skin, eyes filled with all sorts of sorrow and anger and…

She decided to fixate on his chin. It was the only safe place.

"Yes," she said. Her anger was sparking, catching flame, spreading through her like liquid fire. He brought out the worst and the best in her. "You want me dead. You made that quite clear."

Finn looked from her to the air in front of her and back again. He did this a few times before his voice changed to something resembling enlightenment. "Is this some kind of Force thing right now? Are you communicating with Kylo Ren?" His eyes widened again as he heard his own words. "Rey! Don't! You—"

"Clearly. You chased me down to Crait."

"I chased the Resistance down. I told you before… all of this needs to go away, to be left in the past. The only way forward is to destroy the things holding us back."

"I was with the Resistance, as you very well saw!" she half-snarled, ignoring the rest of his statement. If she focused on it, she'd remember looking at the hand held out to her, the hand she'd rejected.

Rey couldn't even begin to formulate an answer to that.

But then one took shape.

"You're a child," she said. "Whenever something doesn't go your way, you throw a complete tantrum and wail at the world like we're the ones torturing you! It's like you never grasped the concept of self-control!"

His eyes darkened, his temper flaring just as predicted. He opened his mouth, surely to launch some sort of heated response. But then, to Rey's surprise, he pressed his lips together, curling his fingers into fists at his sides. What was he trying to do, prove her wrong? It'd take a lot more than that.

"You're not the only one who has suffered, Ben. You had caring, loving parents—much more than I ever got. One of them is still alive, too! You could—"

Rey leaned back despite herself, his shout ringing in her ears.

And then he was gone.

Vanished back into whatever dark hole he'd crawled out of.

She turned to find Finn staring at her.

His mouth gaped open. "What the heck just happened? Why are you talking to him? I thought you guys—"

"I'm not talking to him. He just got through my defenses." She frowned to herself, staring into the jungle again.

"Remember how you used your Force magic to keep me still?" He waited until she was looking at him. "Not cool, man."

She nodded. "You're right, I'm sorry. I just… panicked. It won't happen again, I promise."

He nodded in turn, and then frowned. "So you and Kylo Ren…?"

"Like I said—he got through my defenses. Let's go inside, it's getting dark."

Finn went on ahead, and she hesitated for a moment, turning to the place where Ben had stood.