In which Pearl is just trying to write down the lyrics to her next Sick Rap(TM), and Marina seems oddly insistent on talking to her about...something or other. She's not really paying attention.
(Pearl, Marina, and a misunderstanding that works out in the end.)
Contains illustrations by Faerieko.

"I've...been really feeling something lately, Pearl. My heartbeat's been stronger than any kind of fresh beat I can mix up."

Marina’s voice stirred Pearl out of her thoughts, breaking her concentration and leaving her high and dry on how to end her next rhyme. Pulling one earbud out with a sigh, she gave Marina a quick glance. The Octoling had this watery, nervous smile on her face, her tentacles curling in on themselves.

“For real? You sure you don't have a cold or something? I know we're big stars and all, but that doesn't mean you have to work yourself to death.”

…You know, in retrospect, this verse was weak anyway. Pearl crossed it off with a flick of her wrist, the rest of her attention swiftly redirecting itself back to the melody she was listening to.

"It's not bad, I mean...it only happens when I think of a certain someone..." Marina’s voice was expectant.

Jeez. She wasn’t a mind reader. Besides, couldn’t Marina tell she was busy?

“Huh…? Who’re you mad at?” Pearl replied at length. Ugh. There really was no way to rhyme “orange”. What a stupid word.

Pearl put her chin on her palm, sighing. She was going to finish at least half this song tonight. If she didn’t even have the chorus, the rest of the lyrics were practically walls without a foundation.

“Pearlieeee!” Marina half-whined, getting out of her seat to stand across from the table Pearl had claimed for her work space.

“Okay! Okay! Fine! If it’s that important, Marina, I’m all ears.” Throwing her pencil down, Pearl leaned back in her chair, arms crossed. “It’s not like I’m busy throwing down sick rhymes or anything like that.”

Despite her harsh words, there was absolutely no real annoyance in her eyes as she did, indeed, give Marina her undivided attention.

“What is it?” she grumbled, adjusting her crown.

Marina played with her fingers, the green tips fluttering like butterfly wings; soft and quick. “I just wanted to tell you about how…something’s been on my mind. Someone?”

“Okay…? Who is it?” Pearl said slowly, not quite willing to jump to conclusions yet. For once, she actually waited it out.

Marina was starting to blush, a fine powder of green scattering across her dark cheeks. “Well, it’s a girl…and she’s an Inkling…”

…No way. Nuh uh. This couldn’t be happening. Could not. Nope.

Pearl’s eyes slowly widened. No. Confessions and stuff like that? That didn’t happen to her. Especially not from—her best—friend?

Inhaling deeply, Pearl tried and failed to keep her voice level, her pitch hiking up slightly. “What about her?”

"She's super cool...super fresh, even--a-and I don't know how to tell her." Marina cupped her cheeks as if they were a raging fire that she could smother out with her palms.

“Th-Then why don’t you just tell her? Be upfront about it!” Pearl salvaged her composure quickly, making a show of slapping her palm on the table and smirking wide enough to show her fangs. “Marina, you’re the freshest girl in all Inkopolis! Bam, done!”

Marina’s jaw dropped. “Wait, do you mean you feel the same way?!”

…Wait, WHAT? Sh-She’d only meant that as an example! That all Marina had to do was come out and say, “Hey, you’re fresh, I like you, let’s go out!” instead of all this beating around the bush stuff…!

Pearl’s brain shut down like Marina’s laptop when it overheated. She wheezed, staring blankly around their apartment as though she could find something to distract them, or change the conversation—

“D-Do I feel what way?” Pearl stammered after failing to find anything to make an elegant tangent over. “Wait, what the carp are we talking about?!”

Did fresh equal like? Who actually liked her? Pearl hated to admit it, but prior to becoming a celebrity, she hadn’t exactly had a stellar teenage romance thing going on or anything like that. For all she knew, Marina could be talking Octarian slang or something…!

Marina was sharing every single moment of Pearl’s mind-blisteringly intense embarrassment. She waved her hands, trying to put out the fire that was consuming both of them. “Never mind! My tongue slipped!”

“Wait, wait, hold your seahorses!” If they just left it like this, they’d be unable to talk to each other for the whole dang week. Their newscasts would be a disaster! Pearl rubbed her forehead for a moment before she shot Marina a glare. “If that was just a tongue slip, I’ll eat my crown!”

Marina gulped, shoulders stiff, like Pearl had a charger aimed at her and she had nowhere to hide.

“Are you saying you think I’m the freshest girl in Inkopolis? Then of course I think the same of you! It’s not like I’d ever accept anything less than the best for my partner!” Pearl snapped.

For. For their. Singing. Group.

Marina, with her silly, nervous grin and sly Octoling eyes; with her girly laugh and love for affection; with her crazy high Turf War scores and love for tech…she was her partner. Her best friend. Shell yeah she was fresh! Off the hook, even! That was normal for her to think, right?

…Normal for Marina’s heart to pound over?

Marina covered her face, peeking through her fingers after a moment when Pearl fell silent; the pale Inkling had huge, wide eyes as the realization finally broke through her denial. “W-We’re talking about the same thing, right?”

“I…I think?” Pearl had to look away, suddenly unable to stand looking at Marina’s face. “S-Saying someone’s the freshest squid—er, octopus in town is pretty universal.”

She’d literally never given a Salmonid’s rear that Marina was an Octoling. The girl had been just as lonely as her, one way or another, when they’d met…

“R-Right!” Marina removed her hands just long enough to say that, before promptly burying her face back into her palms again. “I like you a lot! More than any other Inkling or Octoling!”

“I like you a lot too?” It came out as an accusing question, just because it was so stupid that she felt like she even needed confirmation of this fact. She was one of the few people Pearl could actually stand—

The ambiguity just fled the situation with those words.

“That’s a confession!” Pearl yelped, standing rigid as a cattail in her seat. Even her tentacles went stiff.

And then, Marina did the cutest thing. She put one hand against her chest, the other sliding across her face as she turned her head, showing Pearl the edge of a shy, giddy, smile. Her eyes were creased at the corners, making a sort of happy squint. 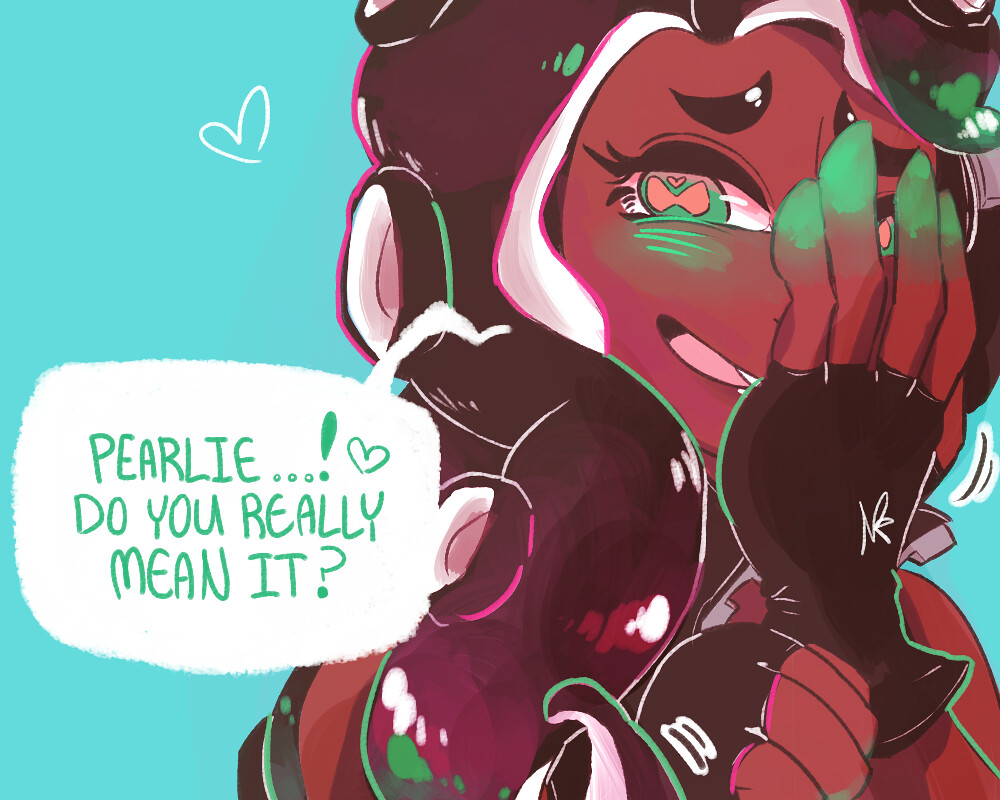 Pearl felt like her heart had just been splatted. 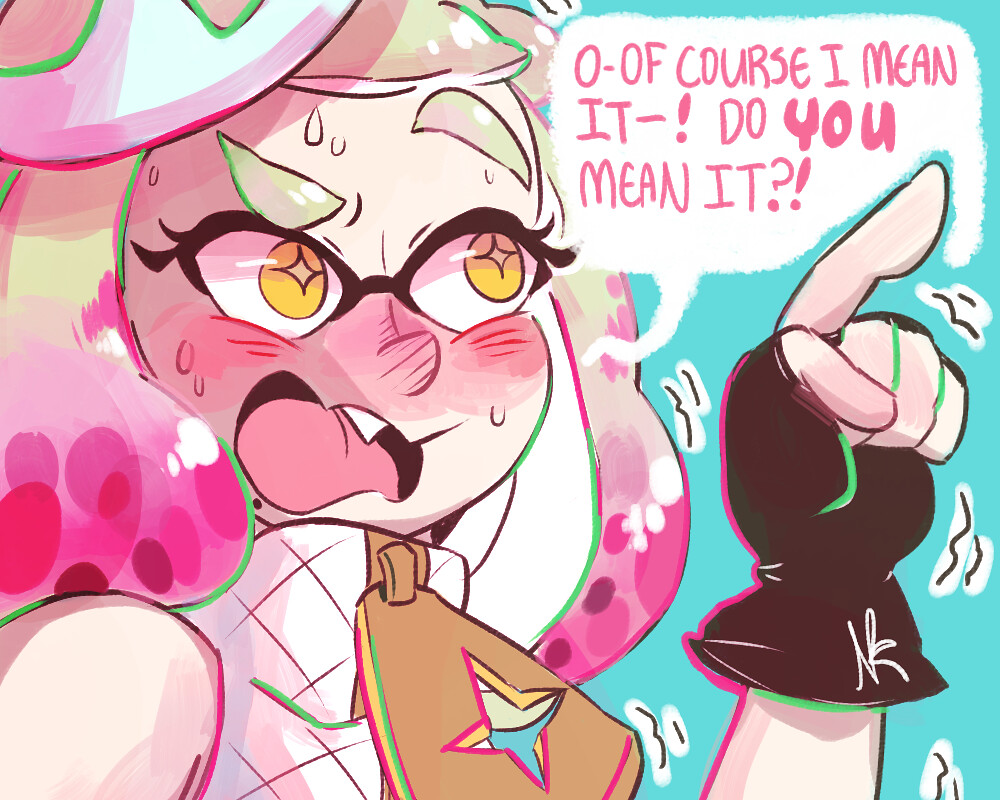 Pearl. Shut up. Why was she even talking. The words just tumbled out as she desperately tried to buy her frizzing brain some time to catch up.

“I’ve been trying to hint at it all day! Of course I mean it!” Marina copied Pearl’s action from earlier, though not as aggressive, slamming her hands on the table as she finally looked her straight in the face.

All day? What even. Was that why Marina had been all touchy-feely today? Moreso than usual?

Pearl bristled for no real reason, just reacting to the tone. “Well, excuuuuse me, princess! Then I guess we’re dating now! No take backs—you’re stuck with me!”

“And you’re stuck with me too--!” Marina suddenly fell silent, the playful scowl on her face dropping away. For a terrifying moment, Pearl thought she had just screwed up her first relationship and her first real friendship in one fell swoop, but then Marina said: “Then…does this mean we can kiss?”

Squid Jesus, she needed help. She was dying. It was like working for Grizzco all over again, drowning in foreign ink…or Salmonid slime, more like.

Pearl barely recognized her own voice when she spoke. It came out as a gurgling, squeaky sound, not unlike a dolphin. “W-Well yeah…duh…”

There was literally no way she could scrape her composure back together at this point. Pearl hopped to her feet. “Hey, Marina…c’mere.”

Were they supposed to kiss? How do kisses work? Didn’t Octolings have a different way of kissing? She heard they actually used tongue—

Marina walked around the table until she was right next to Pearl, her tentacles curling up and down quickly at the ends. She peeked at Pearl from the edges of her eyes, and for the love of every god out there, Pearl swore she was teasing her when she said: “Do you want me to crouch down…?”

Whatever demureness Pearl was feeling exploded, leaving behind a smoldering crater of screw this. Turning red with fury, she leaped up and pulled Marina down by her collar, kissing the Octoling in one swift flow of movement. 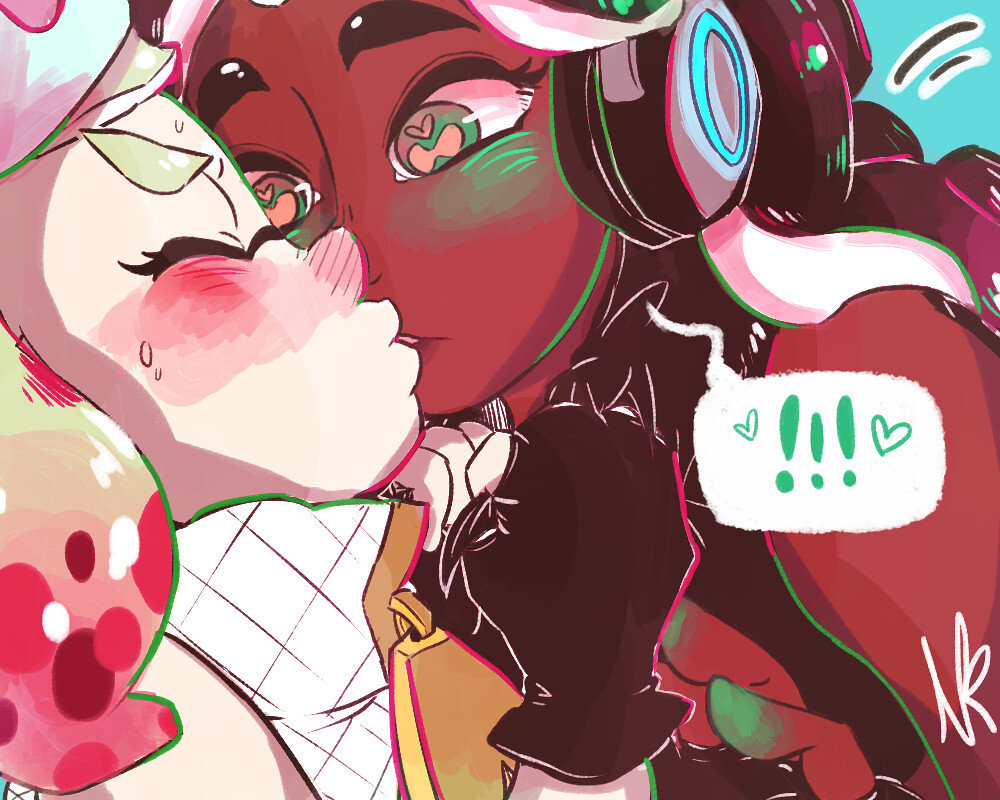 (In Marina’s defense, it’d been an honest question.)

The blush from before paled in comparison to the new blush sweeping across Marina now—it was practically her new skin tone. She wrapped her arms around Pearl’s waist after a moment, pulling her closer, and Pearl felt her smile against her lips…

That pull upset Pearl’s delicate balance she had on the tips of her sneakers, and the result was her losing her balance and falling over, catching the Octoling—who was really enjoying this kiss—off-guard. They both hit the ground, as a result.

Or, rather, Marina hit the ground. Pearl landed on top of her.

Pearl opened her eyes, wishing she could just die or something at this point. Marina was clearly trying to hold back a laugh, failing miserably.

“Ughhh…” Pearl closed her eyes again, not even caring she was lying on top of her friend. Her pride was gone at this point. She’d shot it herself in a one-hit K.O. “You’re the one being forward! You pulled me!”

She could feel Marina’s laughter rising in her chest. Despite herself, Pearl’s lips twitched, and she started laughing too.

“…All right, so I screwed up,” Pearl grumbled, opening one eye in a grimace.

Marina leaned forward, gently bumping their foreheads together. “You did, but it’s okay. I still love you, Pearlie.”

“You’re supposed to tell me I didn’t, and it was perfect,” Pearl grouched, sending her girlfriend a mutinous glower.

Marina gave her a tiny kiss on the lips, and Pearl supposed she could let it go. Marina was giggling again, one arm over her face as she fell back, and Pearl’s expression softened—since Marina couldn’t see it, and all.

yeah my friend and I are super gay for Splatoon so we collaborated on this fic. This is actually a RP we did--she wrote Marina, I did Pearl--but we were so tickled by it that we decided to rework it into a proper fic. I re-wrote our RP into a true story format, and she provided the lovely pictures you see here, as well as the bulk of Marina's dialogue.
If you too love Splatoon and gay sea-life, please leave us a comment! maybe we'll do some more!
You can find me on Twitter here! The artist's Twitter is here!
EDIT: Wow I hope the pictures are finally showing properly.