She felt like giving him all the things he really liked. 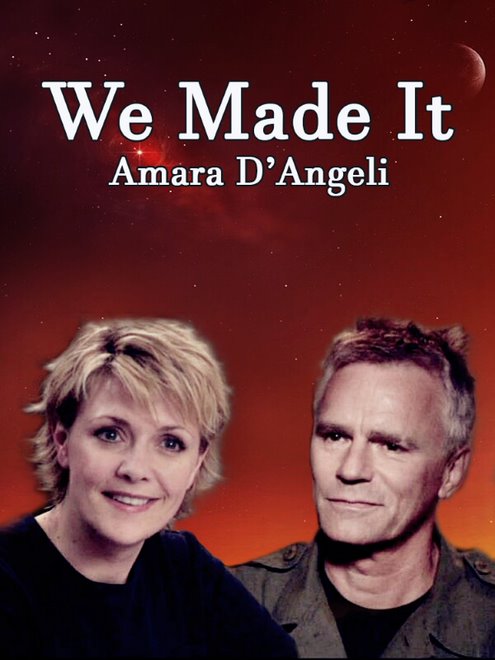 She walked into his house with a cake from a local bakery. Sure, they generally cooked a decent meal, but the man had been filling up on takeout and beer in the four days since he'd been back home from his exile to a moon with Maybourne. She figured one more day of junk wasn't going to kill him. Besides, he really liked cake. And she felt like giving him all the things he really liked. Which was also why there was an overnight bag slung over her shoulder.

She had things to say tonight. Many things. Things born of feelings that crushed her under their weight while he was missing. Things she had to say when she thought he was lost to her. They were things she wished with all her heart she'd said to him at any of the opportunities granted to her during prior meals.

He met her in the dining room, one eyebrow raised, his eyes on the shoulder strap of her duffel and then, conspicuously, on the cake. She tossed him a smile and headed into the kitchen. She slid the cake onto the counter as he lifted her bag from her shoulder.

"Yeah," she said simply. It was a big deal, they both knew it was.

"And you brought dessert."

"I brought dinner," she corrected.

He quirked a smile at her. "Samantha Carter," he drawled her name, "cake for dinner?"

"I felt like you deserved it." She placed one hand against his chest and leaned in for a kiss. He kissed her gently, warmly, fondly. It was such a normal action for them now and her heart constricted with the knowledge that kissing him, while it would never become ordinary, had become common.

Common, yes, but there'd been a time, just mere days ago, really, when she'd thought that her kisses with him lived only in her memory. So, with the knowledge of a woman who knew what she had missed, she leaned back in for another kiss, deeper than the one that came before. He stepped into her, wound his arms around her and slanted his head. He deepened the kiss more fully, cognizant of her need to be possessed. He always seemed to know just exactly what she needed.

When they parted, they both sucked in breaths that illustrated how fully involved they'd been with one another that even breathing had taken a backseat to passion.

"I missed you," he breathed into the space they were still sharing.

"Missing seems like something I did at first. I think I started to mourn you, a little."

She interrupted him with a small, watery chuckle, "I cried on Teal'c."

He kissed her forehead. "He's got broad shoulders. He can handle it."

She nodded, blinking back the tears that threatened at just the thought of having nearly lost him. It had put a lot of things into perspective. Like, what they were doing… and why. "But, being without you for a month... it made me think."

"Me too." The quickness of his reply made her heart flutter.

"I thought a lot about what we we’ve been doing here. I know we can’t… I know things are…" But when it came right down to it, she wasn't sure how to say it. That she loved him in that once-in-a-lifetime kind of way and that she was committing herself to him, completely. "I want to be with you."

He seemed to know exactly what she was feeling because he said, "Marry me."

"I know we can't actually get married. It'll be a while before we can. In the meantime, be the woman I'm going to marry." He looked so earnest, so forthright.

"You don't think it's just going to make things harder, to be so close and so far all at the same time?"

"It's not enough," he said snagging her fingers with his and twisting their hands together, "but it's the best I can do right now."

"It's not about getting married, you know that, right?"

He looked a little uncertain. "You don't want to get married?"

"I do," she reassured him hurriedly. "But I'm telling you, no piece of paper is going to change how I feel. I got a taste now, several times, of what life is like without you. And I'm not doing that by choice."

"So, you do want to get married?" He asked, still a little confused.

"So, you promise to honor and obey me?" He said, a cheeky smile on his face.

"Honor, absolutely. Obey, to a point." She didn't have to remind him that the point was in the field.

The words weren't flowery, and he wasn't going to win any awards for his romanticism. But she understood. Because despite the promises they were making, nothing had changed with the way she felt about him. The strength of her feelings was such that there was no more to be given.

"I know it's not something I say often enough," he started, "and it's something you deserve to hear so often that--"

"I know," she said, raising her hand to his cheek. "Me too." That they didn’t need to say the words made the words feel so much more powerful. That they could evoke them with a look, it spoke to the power of their feelings for one another. “So… one day.”

“Yeah. That okay with you?”

She smiled softly, “It’s more than okay with me.”

He pulled her into a tight embrace. She fitted them together tightly, pressing her face into the warmth of his neck, her lips against his skin. She could feel him shiver from the contact. Nothing made her feel as powerful – not a weapon, not a battlefield – as holding this man’s passionate responses in the palm of her hand.

And now she had not only his heart and his body, but she had the commitment that she’d always, she supposed, sort of knew they were heading for. But it felt nice to say it out loud. To hear him say it out loud.

She wasn’t sure what life was going to deal them, if they would both live to see their commitment pledge play out all the way, but knowing that she had a partner made it all seem so much more surmountable than it had when she was walking through his front door. If she didn’t live to see a wedding day with him, she found herself only slightly saddened by the idea, because what they’d done, standing right there in his kitchen, meant just as much to her as if they’d done it in front of a priest.

“Thank you,” she said against his skin. She pulled back just enough that he could look into her eyes as she spoke. “I didn’t know how much I needed this.”

He cupped her cheek. “I know how important the commitment is. I would have made it a long time ago, if I’d thought…”

“I never dreamed it would be enough this way either, but it is, Jack.”

“You’ve already given me everything that matters.” She pressed a gentle kiss to his lips. “And now, I think it’s time you took me to bed.”

He grinned at her. “What about the cake?”

She considered him for a moment, tossed him a wink and said, “Bring the cake.”

Well, that's it, the final chapter. I debated long and hard about how far to go with this series, with, to be frank, whether or not to include the Pete situation. Originally, I planned to. They were going to be ripped apart and then brought back together by the events of Threads. But ultimately, I decided I'd built a couple too strong in their love for one another to be pulled apart by a man who couldn't, in my opinion, live up to what Jack and Sam have.

So, that's all. Thank you for coming on this three-year journey with me. I sincerely hope it was as good for you as it was for me.