Chapter 24: Afterword: What Would Have Been

A look at what was considered and discarded.

I posted the final two chapters within the last 24 hours of posting this, so if you haven't read 'em yet, make sure to do that!

I went back on forth on this a lot, but ultimately, I’ve decided not to write a follow-up to Evil Queen.

I have a love/hate relationship with this fic. It is fun to do. But it is SO MUCH WORK. I really don’t know how people like Dowdz and FlOrangey and Circuit do these reimaginings of the whole game’s story and can stick through with multiple arcs and consistently deliver such engaging content and keep a goddamn schedule of all things. It is mind-boggling.

That said, I didn’t want to leave folks fully in the lurch. I did have a lot of fun thinking up what future arcs would’ve been, so here’s a rundown of my now-abandoned plans. But first, I wanted to show some of Hureno's unfinished art. Here's the original sketch of Shadow Makoto and a mostly-finished depiction of Shiho's Persona Sonya. 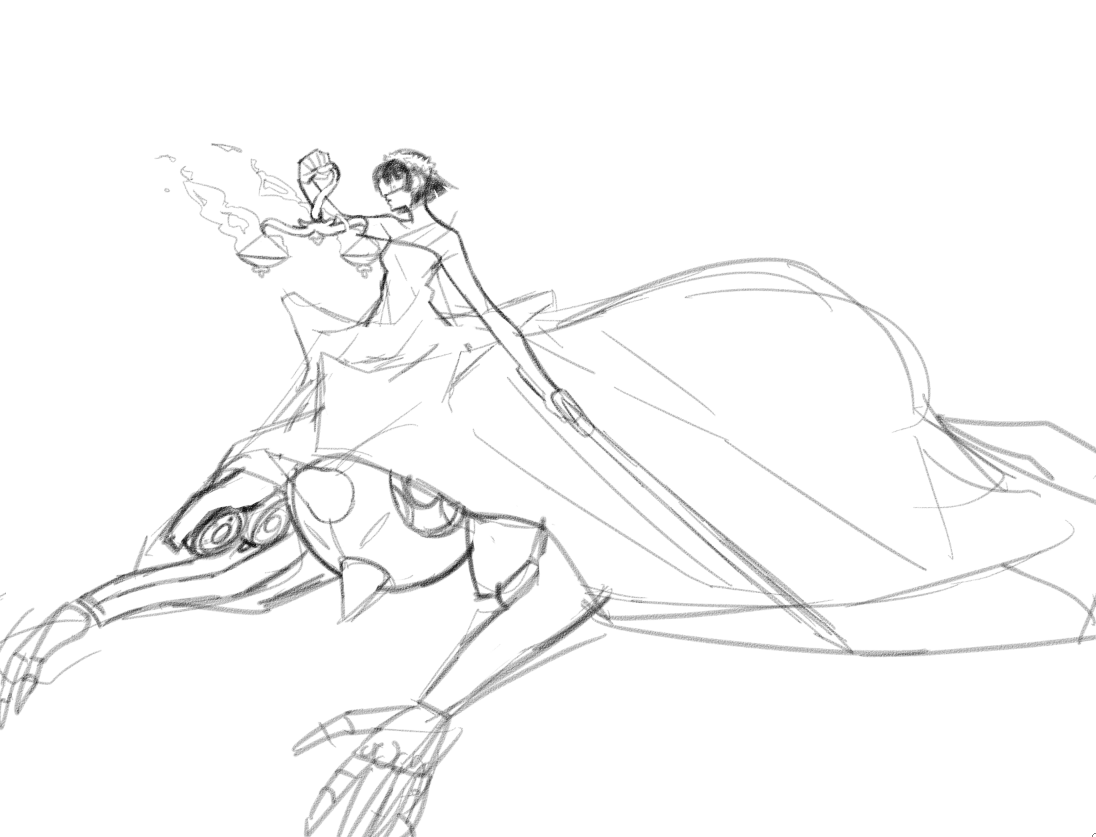 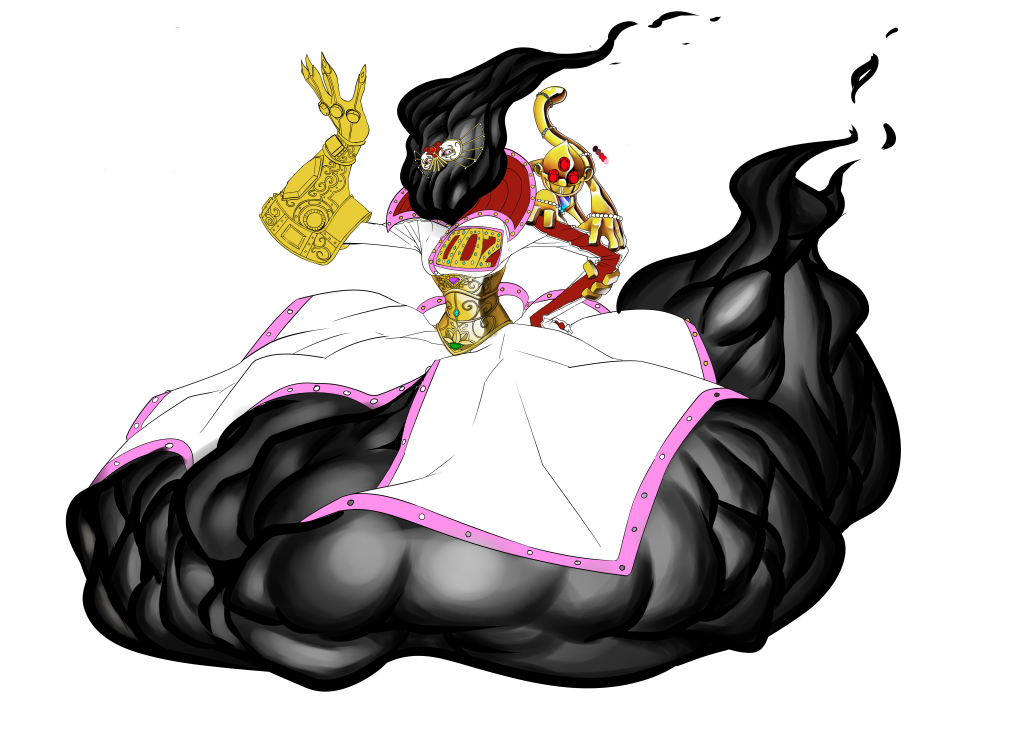 I don't really remember why Sonya is a smokey form. I think it might have something to do with a myth about her grave, but it might also just be artistic license. I do know that the real Sonya Golden-Hand (hence the big ol' Infinity Gauntlet-esque golden hand) had a trained monkey that would swallow and later poop out stolen jewels, hence that little freaky guy on her shoulder who looks like he came straight out of the Cave of Wonders. The 007 on her chest is a reference to Shiho's love of spy movies and the general Spy aesthetic of her PT outfit.

Now for the actual plans:

The second arc would’ve had Hifumi take Yusuke’s place on the team, with her mother being the Palace Owner. Hifumi’s Persona would’ve been Madame Ching, with her weapon being a spear or naginata. Hureno and I discussed some design options and while originally I was thinking of calling Hifumi something like “Shogun” or “Geisha” and having her wear an outfit to match Yusuke’s ninja-esque garb, towards the end we were leaning towards “Wolf” and looking at a Princess Mononoke-inspired appearance. 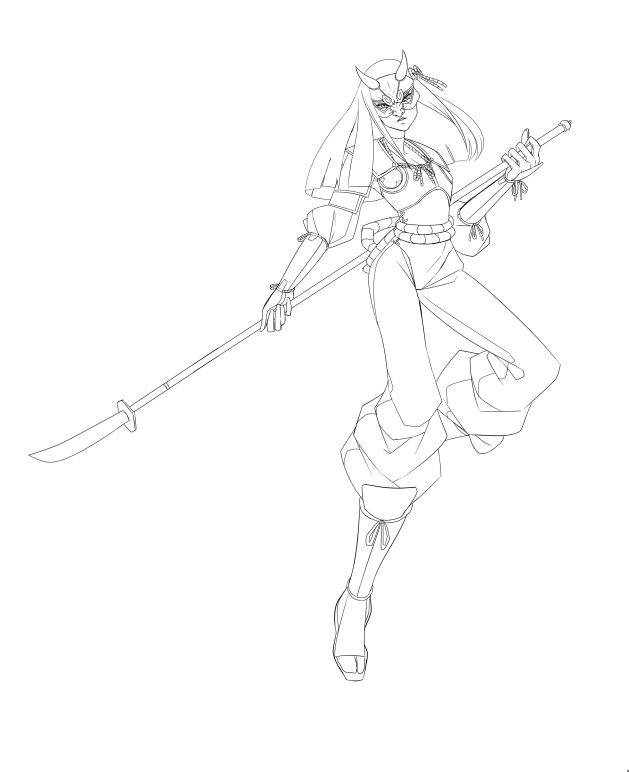 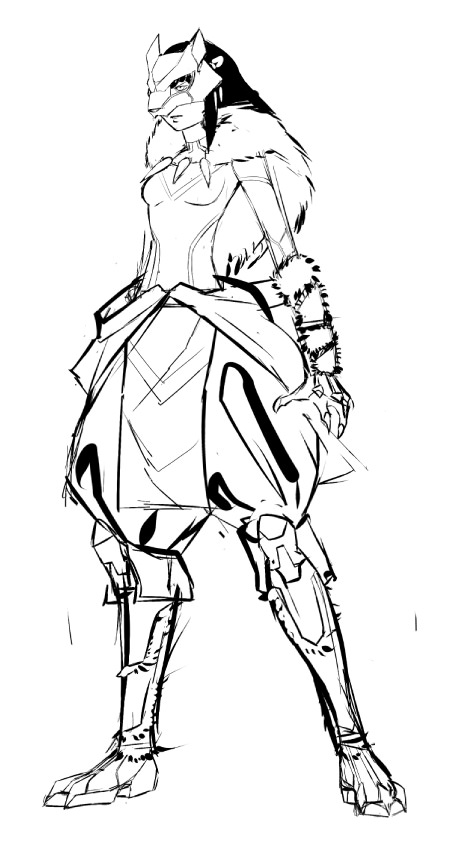 Mitsuo Togo’s Palace would’ve been a TV Station, with Cognitive Hifumis happy to basically be sold as media, little subservient dolls making their mom money and looking generally glamorous. I also considered the idea that she was responsible for her husband’s chronic illness to really sell the evil that would result in an entire Palace. I also would’ve planted the seeds of an Akira/Hifumi romance, though I don’t know if I would’ve committed to it. I at one time considered an Akira/Ann/Shiho love triangle, but just didn’t want to deal with it.

Yusuke would’ve appeared in the story too. He would be free of Madarame thanks to Akechi having helped him in the past, and would’ve been the one that turned Akechi onto the idea that Hifumi may be going under some kind of abuse, having recognized past behaviors of his in her.

Mementos would also be introduced, though not as you know it. Instead of an underground train system, the idea is Mementos would’ve blown up with the fall of Yaldabaoth, and now would be a bunch of islands of concrete and broken pieces of railway floating in the sky. The Phantom Heroes would be able to fly from island to island in a vehicle given by Igor to Akechi, a blimp/hot air balloon/airship thing that looks like a cat called “The Morgana”.

In addition to all this, I also wanted to flesh out Akechi’s backstory more exploring why somebody who’s been infiltrating Palaces for three years isn’t much stronger than his juniors. The reason for this would’ve been that he was depending entirely on Loki for much of his career, as it was significantly more powerful than Robin Hood. But since Loki was born of Akechi’s negativity and madness, Loki getting more powerful meant Akechi got more unstable, and so he had Igor excise Loki from his being for the sake of his own sanity and only recently started relying on Robin Hood.

This would’ve been the return of Makoto and Ryuji into the story. Makoto would be delivering lunch to Sae at work and then overhear the SIU Director planning to dispose of Sae because she’s getting too close to a case against Kaneshiro which would also implicate the Director. I never actually decided what the Director’s Palace would be.

The idea would be that Makoto has the Metaverse App thanks to Akira bringing her there at the end of Evil Queen, and reconciling with her Shadow has given her a Persona but she’s never actually used it. At first she’d bring Ryuji in and awaken him to a Persona since he’s the only real friend she has (I also probably would’ve been teasing a romance between them, or at least a one-sided crush from Ryuji’s end), but they wouldn’t be enough and she’d reluctantly approach Akira for help. It would be very awkward for everyone involved but naturally Akechi isn’t going to let Sae die, so the Phantom Heroes are on the case.

At the end, Makoto and Ryuji would not permanently join the Phantom Heroes. With their work saving Sae done, they’d retire from being Persona users.

This is by far the least concrete of my ideas.

I would’ve already introduced Futaba and Wakaba as Sojiro’s housemates earlier, probably during the Togo arc. I think Wakaba would’ve become a Confidant of Akira’s thanks to her Metaverse research, though what form this takes beyond her getting Sojiro to ease up on him I never fully considered.

I thought of the idea of Mishima as somebody who was already online friends with Futaba and who starts the Phan-Site like in the original story (that’s as far as I got in “but how does Futaba actually get involved”). I had some ideas of him getting high on his influence like he starts to during his Confidant arc in the game, but I never really fleshed it out, and could never conceive of a high-stakes reason for the deadline. I think maybe his Palace would’ve been a Tron-esque digital world with his Shadow as the MCP or something.

I never really figured out what would replace the Okumura arc. I also never really decided how to fully fit Haru into this, but I did consider the idea that she made a request to the Heroes, they defeated Kunikazu in Mementos, and she became a friend of theirs but not a member.

I think maybe I briefly entertained the idea of the Cleaner (that yakuza muscle) as the Palace ruler? Like maybe with Kunikazu’s change of heart he was gonna come for him and Haru needed help to save her father? I don’t know. I might be making that up on the spot honestly. Seems like too much of a retread of the SIU Director arc.

This one’s probably my favorite.

I think I would’ve hinted earlier on that the Shadow Operatives had begun to investigate the Phantom Heroes because Mitsuo Togo’s TV Station Palace was somehow broadcasting to the Midnight Channel. In this story, Mitsuru’s power would be completely unchecked (honestly kind of like I write it in my main fic verse, but there I present the idea as heroic and good whereas here I would not) and the idea of this rogue group of Persona users going around changing hearts would really set her off. I never fully decided what her threat/deadline was beyond maybe trying to conscript to Phantom Heroes into the Shadow Ops on threat of kidnapping or possibly death.

The real interesting part would’ve been in the new member that joins the team: Shinjiro Aragaki. I would’ve had Shinjiro having survived P3 with his Persona-pill illness having disappeared with the end of the Dark Hour (this universe would be a FeMC run), but with the death of Minako he just decides he doesn’t wanna stick around Port Island so he asks the doctors to forge his death certificate and runs away. He would wind up in Tokyo where he changes his name and becomes the personal chef of the Okumura family, being very protective of Haru. How he learns of Mitsuru’s corruption was something I never decided, nor what his thief outfit would be, though I figured I may go for something Greek-related to keep with P3’s themes. I might have also made Mitsuru’s Palace Greek-themed, maybe like a modern Sparta, but I never gave that much consideration either.

I do like the idea of Shinjiro the Okumura chef though. May still write that story on its own one day, sans Evil Queen context. Hell, I was actually planning on writing it, pretending it was its own separate AU, and later surprising people by folding it into the Evil Queen sequels, but obviously that’s not happening now. If I ever do actually write it, though, it will be canon in the Evil Queen universe, but that won’t matter much because it’ll be a prequel that takes place when Haru is a child and it’s not like I’m writing any of these stories that would follow up on it.

The only returning arc from the game proper. I really did not give a lot of thought to this. I considered the idea that Akechi learns Shido’s his father and re-awakens to Loki and then his friends could talk him down and now he’d be able to control that Persona since he has a support system. I also entertained the idea of changing Shido’s Palace from a ship to a creepy daycare center where the rest of Japan were children that needed to be taken care of, though this is just because I briefly thought that’s what Shido’s Palace would be the first time I played the game before the ship reveal.

There would’ve been no final Yaldabaoth Palace, obviously. I did very briefly consider the idea that there would be a new Black Mask that would turn out to be Yusuke, but this was less of a serious story thread I wanted to pursue and more of a passing fancy I had to make things different for the sake of being different. In retrospect I think it could make a good parallel to Akechi’s original arc from the game, but I never really planned for it. I think it just would’ve all ended with Shido and then Akira — having finally gotten his name cleared and the absolution he’s desired all along — would’ve gone home, leaving the others to continue their work without him. I really wanted Akira to stay reluctant the whole time and take an out when he finally got one, though I can’t imagine people would’ve been satisfied with that characterization/ending, so it’s probably for the best I didn’t write it.

And really, that’s how I feel about the sequels in general. I’m not big on planning stories. Usually my plans go that I have a handful of ideas in my head and just run with it and see what happens. I think just Evil Queen proves that. Hell, I “planned” for Ryuji to play a bigger role in the climax of Evil Queen and totally forgot by the time I got to writing that part of the story. The longer I allowed this to go on, the worse it would’ve gotten, so I’m fine ending it here.

I’d like to thank everyone who did read and enjoy the story and extend my apologies to those who hoped it would continue. I never predicted when I started this that it’d take nearly a year to finish, and so I hope you understand that sequels are a commitment I’m just not willing to make.