in libido ~the tragedies of a love gone unnoticed~

Indie bandman Rei is bored. So he seeks pleasure to kill off some time and indulges on his own fantasies of a certain popular bandman in the process.

A fic not about Gara?! *gasp* Well, Rei is from a small band called Marco (マルコ). They're basically a baby MERRY almost, and Rei idolizes Gara, like a lot. I highly recommend you check them out~ 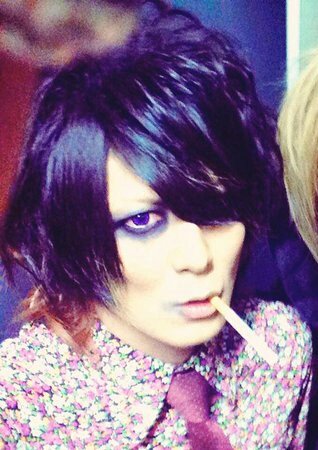 A stain began to form on his thong, as he imagined his idol’s warm semen filling up his stomach.

God, I wish it was you fucking me instead!!

Of course he wouldn't let himself cum that early, especially not in front of his senior. He would be so ashamed, he thought, and would never take him seriously. Only time could tell how many times people took advantage of him, how many times people judged him and told him he couldn’t do it, that he was some crazed copycat...but he was bound to make his muse happy, no matter what he did. Frustrated due to the lingering thoughts in his head and the heat of the moment, he grabbed on the head of his cock, and flicked on the switch with his thumb.

He laid back down as he sighed in relief and closed his eyes. One day, he would truly be able to show him his love and devotion…

itsukoii as well as 2 guests left kudos on this work! (collapse)